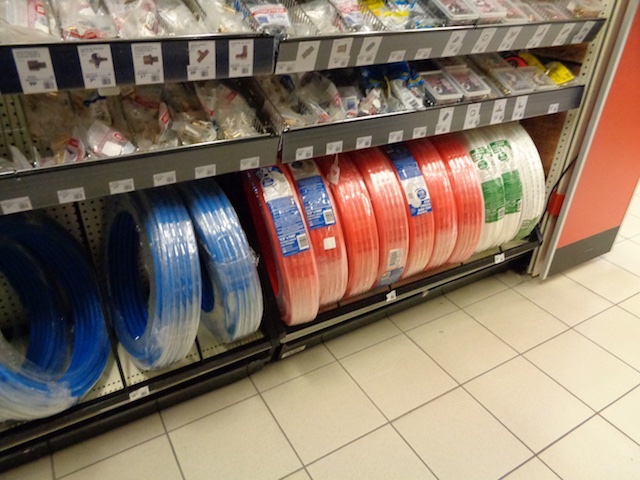 If you have to do some plumbing at your place, than I would suggest looking into Installing Pex Plumbing for easy repairs. It will save you time and money compared to copper, galvanized pipe, or CPVC  plastic.

In many homes the plumbing pipes were made from galvanized steel, but the problem with these pipes is that over time rust would build up, and thus give a lower volume of water. Have had quite a few complaints from people wondering why there water pressure was so low at there sinks.

Many of the galvanized pipes were replaced in the 60s and beyond, by putting in the plastic CPVC which has to be glued at the joints, or the copper pipes which are soldered together.

In the plumbing business copper pipes take so much longer to install than any of the plastic water systems.

Then in the 60s Pex tubing was often used in radiant heating systems, for moving hot water from a heating system to radiators in your home.

As time went on Pex became more popular with being used for plumbing in homes, and in the year 2000 and up it was replacing the copper and CPVC pipes as well.

One of the advantages with Pex is being able to bend it, as long as it is not a 90 degree turn, so it can be run often directly to sinks, toilets, or showers without any loss of water pressure from fitting 90 degree elbows.

As far as price goes Pex is cheaper than copper, as a 100-foot roll of 1/2 inch will run about $25 to $30 dollars, and the fittings are very reasonably priced as well.

Valves for Pex are from 6 to 10 dollars each, and are a push fit onto the Pex than crimped tight, making for a very quick connection and saving time, were copper fittings need to be soldered together which is something you need to be good at, plus the price of copper has gone up.

Pex tubing comes in red, blue and white, so if your doing your own plumbing you can use the red for hot water, and blue for cold, so there will be no mix up when connecting up to your showers, sinks, toilets, and laundry machine.

The fittings for Pex are attached using a compression tool on metal bands were ever a connection is needed, and there is a special cutter to cut the Pex tubing that gives a very clean cut.

The cutting tool is usually priced at about 30 dollars here in Canada, and the compression tool goes from 70 to 100 dollars, with most hardware stores selling the tools for the Pex fittings.

Copper and the CPVC pipes will bust open from freezing before Pex does, but all plumbing pipes will burst if frozen hard enough, so it is better to drain them if left in an unheated house, which can avoid costly repairs. The foam wrap can also be used to keep the hot water hot on pex as well. 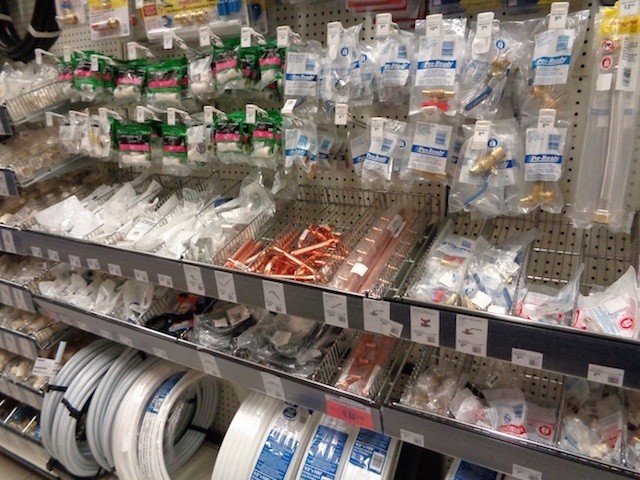 Pex does not like sunlight, and will become brittle if exposed for to long a time, so best to go with some other type of plumbing for running water outside.

It also requires special tools for its connections, which can be bought at almost any hardware store that sells Pex.

If you’re running Pex through 2×4 studs in your walls, drill the holes in the center of the 2x4s, so the drywall screws will not put a hole in the tubing, and as an extra precaution you can add a steel plate over were the Pex is installed.

For any home-owner or do it yourself er Pex is an easy product to hook up, and very adaptable to all other plumbing types.

One thing that’s important to remember, is when crimping the Pex tubing to any fittings is to have the ring within 1/8 to 1/4 inch from the end of your Pex pipe on the fittings, and be sure the jaws of your crimping tool close security on the rings.

A manifold for Pex is considered to be a distribution point for the water lines that will run to your shower, sinks, toilet, etc.

It is a copper or plastic tube that has 1/2 inch fittings coming off it, and you can crimp your 3/4 inch line from the water pump to one end of it.

These manifolds come with different amounts of outlets on them, you just need to figure out how many lines your running off it, and buy the appropriate one.

Some also come with valves on the outlets, which are helpful if you just wanted to shut one line off for repairs to taps, or showers, but than I recommend valves close to the sink taps, and toilet to be able to shut them for repairs, instead of running down to the basement, or were ever your main water pump valve is located.

The plastic manifolds are made with a high performance thermoplastic, and will not be affected by heat, moisture, or high chlorine levels, and they also resist corrosion and scaling, so are as good as the copper manifolds.

Connecting to a Hot Water Tank

Connecting Pex to your hot water tank is also very easy, but the recommendations for this is that you have at least 18 inches of copper pipe coming out of your water tank before connecting with the Pex.

Also, if you happen to crimp the O rings the O rings in the wrong place they can be cut of with a rotary tool, or recently i have seen a special tool for this, and than cut the Pex back for a fresh fit on your connection, apply a new ring, and crimp it in the right place.

When you are connecting Pex for a bathtub, there is a copper stub out that is secured to a 2×4 for this. It will be positioned over the center of your tub, and can be cut later at the right length for your faucet spout after the wallboard or cement board and tiles are installed.

The Pex tubing will be crimped onto the stub out making for a very easy and quick installation.

Another thing is that if you’re running Pex for a long distance, you might wont to leave a loop in the run for expansion and contraction, but for shorter runs the Pex can be left loose between connections, and not stretched tight.

There are plastic straps that allow the Pex to move, and are used were ever needed to hold the lines in place, and they come in 1/2 and 3/4 inch size.

You will find that there are three different grades of Pex A, B, C, with A being slightly more flexible than the other two, but the difference is so little that any of the three grades work well in the home.

So in conclusion if your looking to do some home plumbing repairs, and are looking for a money saving way to do it, than give Pex a try.

Any comments, just drop me a note,