This church had not been taken care off for a good length of time, and the Stairs for Church Basement had rotted away on the bottom of the stringers. 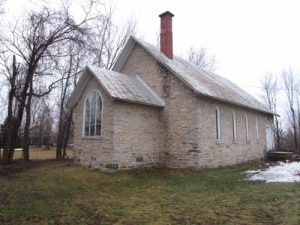 The old stairs were more of a ladder then anything else, and very difficult to go up and down.

They also went down so that you had to walk into one of the walls, not good.

The best thing to do in this situation was to take the old stairs right out and replace with new ones that would go out into the church basement. 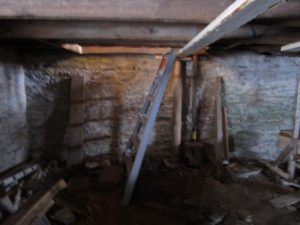 As the floor in this basement is still dirt and rather uneven the total rise could not be overly accurate, but after measuring in a few places you can come up with a figure that is fairly accurate.

There are many automatic stair calculators on the internet you can use once you know the total rise.

A comfortable step height is usually seven inches, but can be a little one way or another and the thread depth is often ten and a half inches with the thickness  being inch and a half in this case.

Stair Gauges For Your Square

Once you have all the calculations figured out you can use a square to mark off the stringers. The stringers are usually two by twelves or two by tens.

A set of stair gauges that attach to your square work very well, putting them at the height of the riser and width of thread. 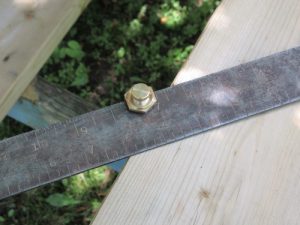 Also remember to cut off the inch and a half for the thread from the bottom of the stringers, which will make each step equal in height.

If your stairs are three feet wide is best to put another stringer in the center at the eighteen inches. 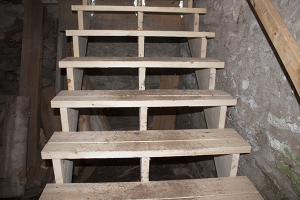 Now that you have three stringers cut out and made it is time to fasten them below the finished height of the upper landing.  In this case it is eight and a half inches down, and once the inch and a half thread is screwed in you have a seven inch step.

You might have to add a two by six for support where the stringers will come. Also at most hardware stores today there are metal fasteners that can be used to support the stringers.

The next thing is to cut out the threads the planed width of your stairs and install them with screws.

Usually the top two by six thread and the bottom are installed first and screwed down, as this is to insure the stringers are lined up right.

You can also leave an inch overhang of the thread nose on the steps, and can be rounded off if you like. 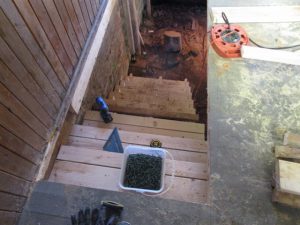 After your steps  are all screwed down then its time to put up the handrail.

It can be supported with four by fours or two by fours that are attached strongly to the stringers, if there is no solid wall for this.

The desired height of the handrail is thirty four to thirty eight inches measured from the top of the threads on your stairs.

Handrails can be bought premade at most hardware stores, or you can make one out of a two by four if you do not wont something to fancy. 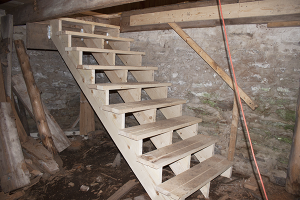 Another thing to remember is to keep about eighty inches headroom where the stairs descend below the top floor, can hurt a little when your head hits the top floor.

So you might have to extend the opening at floor level to give you the right amount of clearance. 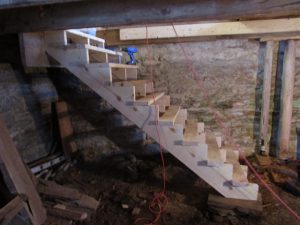 If the opening to your stairwell does not have a railing around it, then probably best to buy or make one and install. You can save someone from having a bad day.

Any comments are always appreciated,