Making Maple Syrup at Home is that time again in southern Quebec for the maple trees to start producing  some sap, and giving you a chance for making maple syrup at home. 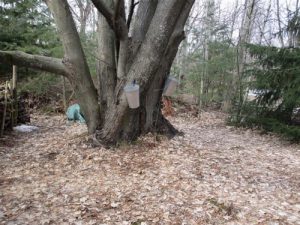 For the sap to run really well we need cold nights below freezing, and warm days with temperatures up to ten celsius or forty to fifty Fahrenheit.

Amount of Sap for Gallon of Syrup

It takes about thirty to forty gallons of sap to produce a gallon of syrup, so lots of work involved in the process.

When I first started making maple syrup it was buckets on the trees, where as today its all plastic tubing working by vacuum pumps.

The tubing does save a lot of work and not nearly as much work as gathering sap from the buckets, and struggling through snow with a couple of five gallon pails of sap.

Many today also use reverse osmosis, which removes most of the water from the sap, and thus reducing the boiling time.

If you wont to make a little syrup for yourself, then just tap a maple tree with your drill and hammer if your lucky enough to have one on your property.

You can gather the sap and boil it down on the kitchen stove, but just keep the windows open or stove vent running for steam to go out.

If your making just a few small containers for yourself it works ok. But if you don’t wont to get your house and kitchen messed up, you can boil it outside using a propane stove as this works well also, and just might be a little more family friendly. 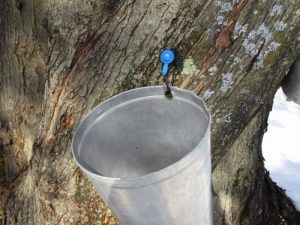 When Syrup is Ready

To tell if your sap has boiled down enough and reaching the syrup stage use a large spoon to see when it starts to drop off in flakes, and also when the syrup is turning a brown color and boiling up in your pot.

There are also thermometers for this to tell when its ready. But if your just doing a little for your self, you can tell how thick it is by watching it skim off a large spoon or other metal utensil you have around the kitchen.

With a little practise you can get it just right for your own taste.

You might also want to filter it when hot  by straining it through a cloth, which removes any sugar sand from the syrup.

Syrup has also been tested to show that it has healthy benefits with over fifty four antioxidants plus high amounts of zinc and manganese, that help the immune system.

Some people also just save the sap, putting it in containers and freezing it, then use it as a drink year round. With all of its health benefits is most likely a good idea.

Any syrup you make can be stored in your freezer, and will keep for years. Just don’t fill your containers too full as they will expand a little when freezing.

There are also many different recipes where maple syrup is used, and on pancakes for breakfast is a favorite.

The only tools you will need for this home project would be a battery drill and hammer, and a few buckets or pails and spouts.

If interested in any tools for this project have a look.

Best of luck to anyone wishing to try this, and comments are always appreciated.